skip to main | skip to sidebar

No news is good news

Yes, us Happy Robots are still taking a break (there's a lot of DIY to do at the moment, sorry), hope you are well, and of course HAPPY xx
Posted by Unknown at 09:02 1 comment:

Some more reviews of Navigation

A joyous debut, equally assured as soundtrack to a tear-stained pillow or as spur to the dancefloor.
The Quietus

Arthur and Martha are Adam Cresswell and Alice Hubley, two long-socked, London-based Moog-twitchers making music that yearns for the future. Quite the thing to be doing at the moment, of course, but while Little Boots and La Roux bring cosmic gloss to the party, Arthur and Martha sit on the sidelines, nerdily fixing their drum machines. Their songs do something different too, combining the geeky sounds of C86 indie pop with krautrock's motorik rhythms and giving teh while album a sheen of strange innocence. On the relentless Autovia and the dreamy Vallorian they recall Stereolab and Hubley's deep, occasionally off-key vocals have teh same askew beaty as Sarah Cracknell from Saint Etienne. But Navigation has harder moments too, and that's when it really soars. Music For Hairproducts is a squelchy Goldfrapppish classic, while Turn to Dust is an epic about leaving the city that has teh kitchen-sink charm of Dubstar and the ambition of ABBA. "Sometimes I want to get away, shall we leave today?" Hubley says, before adding, rather sweetly "I'm glad you're with me." So should we all be.
Jude Rodgers - Word

They've constructed a really diverse album, taking in quite hardy, familiar sounds from years gone by & forging fresh, durable, feisty songs that stick in your head like audio glue, putting a smile on this man's face for ooooh, maybe the second time this week! It's a wonderful journey, spanning decades of inspiration, largely built around analogue-soaked cool European anthems whilst simultaneously offering up some sturdy, modern dancefloor friendly action with remarkable finesse. Get this, it's a total winner!
Norman Records

The production is predictably warm and rotund sounding, but this is no nerdy love-in - these two make electronic pop music in the classic mold, deriving influence from the likes of New Order and Pet Shop Boys, whilst also often recalling Piano Magic and Rephlex easy listening popsters The Gentle People. Singles 'Autovia' and 'Music For Hair Products' are especially immediate, but there's plenty of vintage synth fun to get stuck into right across the LP.
Boomkat
Posted by Unknown at 01:46 No comments:

The debut Arthur and Martha album 'Navigation' is out today.
The cheapest place to buy the album is from our Botshop, though you can also buy the album from...

And HMV, Amazon and Play.com too, but do your bit support your local independent record shop!

The album can also be found on all good download services and onSpotify for those feelin cheap.

"Engaging indie tweetronica debut
With a whiff of 'performance art project' about them, Alice Hubley and Adam Cresswell dress like Enid Blyton characters and play self-consciously cute retro-indie with a Krautrock slant. Over a bubbling analogue backdrop of Moogs, Korgs, Stylophones and Theremins, the duo croom pulse-pop lullabies like the cut-price Kraftwerk homage "Autovia" or the shiny yet wistful "Follow The Path".."
Uncut 3/5

"The lyrics may be tender, amusing, sometimes just silly, but ultimately there is always a stonking tune that takes you away to a special place – somewhere filled with fragile and tenders things, but which you want to dance around."
Narc 4/5

"...it will take a Herculean will to not be won over by ‘Autovia’ and its smooth, caressing vocals.
...‘Kasparov’; Which bridges the gap between James Yuill and New Order, in both sound and quality stakes, with ease and is undoubtedly one of the high points this LP has to offer... 'Navigation' isn’t going to cross over and blow people out of the water, sell millions and be left on everybody’s shelf, but those who do grab a copy will more than likely feel pretty pleased with themselves and play it half to death."
This Is Fake DIY 7/10

"We’ll start by saying a gorgeous record and a gorgeous debut full length to boot....Found cruise controlling pop’s ever expanding cosmos patrolling star crossed hand holding twee tweaked avenues, there’s a beautifully becoming symmetry about Martha and Arthur’s craft as it sweetly transposes the spacey and optimistic future echoes of Krautrock’s more cosmic inclines with the silken synth pop sensibilities of the 80’s that embellishes it with a disturbingly affectionate tug that’s both immediate and familiar and most importantly acutely chilled and sophisticated..."
Losing Today

"The secret of being a successful artist is, in my opinion, being instantly recognisable. So that by the time a song has been playing for less than a minute the listener knows who it is. Having a sound that is immediately your own, irrespective of influences or frailties therein. I think Arthur and Martha have cracked it... Female-fronted electronica with an unashamed glance back to Eighties beepy purveyors like OMD, Visage and New Order."
Sounds XP
Posted by Unknown at 10:10 No comments:

The EP is out today, with five tracks there's a lot to get stuck into and enjoy, you can download the EP from...

Itunes
Play.com
Amazon.com
Emusic
Will update the blog very soon with links to some of the nice reviews the band have been receiving.

Enjoy
The Happy Robots xx
Posted by Unknown at 05:57 No comments:

Music For Hairproducts is out on 29th June, enjoy the video in the meantime...

6music's Nemone on Music For Hairproducts
Russell Reviews on Navigation

More shows are to be confirmed for September.
Posted by Unknown at 03:17 No comments: 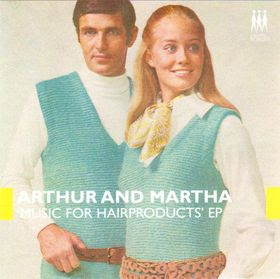 Written on kiddies instruments, moogs and old-school drum machines, the innocent pop-sensibility of Arthur and Martha’s second single, ‘Music for Hair Products’, won’t fail to bring a smile in these times of economic doom and gloom.

Preceding the debut album, ‘Navigation’, is the new single ‘Music for Hairproducts’. Knowingly stupid, and archly clever; it’s an anthem for Head and Shoulders and hair-gel adverts worldwide. We defy you not to sing it’s infectious ‘sha-la-la’ chorus next time you’re foaming yourself in the shower.

The single has already been played on the Gideon Coe and Nemone shows on BBC 6music and Nemone has featured the track in the Lunchbox section of her website, see more here.

Artrocker have called the single "all good being the earproduct of a generally cool pairing. The title track is all mundance concerns, fake handclaps and futuristic grooves. And said remix of Autovia is blooming marvellous".

Arthur & Martha’s debut single ‘Autovia’ received rave reviews from the likes of the NME and Artrocker and multiple Radio 1 plays from Huw Stephens. The band built on this success, gigging with the likes of Lo-Fi Fnk, Grovesnor, Plastic Operator, Sportsday Megaphone and others. The band are flattered to have been compared to Kraftwerk, Add N to X, Pet Shop Boys and Soft Cell.

Arthur and Martha will be playing Meat Raffle at Catch on the 27th June, further shows to be announced imminently.

Even the brightest Japanese scientist couldn’t make robots as happy as this release makes us. We hope this record will make you a very happy robot too!
Posted by Unknown at 12:12 No comments:

For all queries including gig booking for Arthur and Martha contact